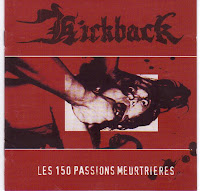 When I first began to think up what bands I was going to feature on this blog I knew that inevitably I would come to one of my all time favourite bands, the almighty Kickback by far the hardest band to come from Europe (counting music as well as attitude). Not only are they one of my favourites but one of the most important in my listening history as it was thanks to Kickback, Earth Crisis, Rykers and Sick Of It All that I became as infatuated with hardcore as I now am. Damn, I still get shivers the first time I think about when Kickback were first played to me, I can see it now, it was a miserable winter's day in my friend's flat in South London but fuck, when 'Heaven & Hell,' kicked in from 'Forever War,' I was S-O-L-D.

With each record the band took big strides and made their most daring creations on this, their last release (now 6 years and counting boys, hurry up with that cursed split with Arkangel) from 2001. Becoming even more intense and producing fiercer, tougher and downright heavier metallic hardcore (not to mention the step up in fierceness of Stephen's vocals check name), they weaved in some interesting ideas that could have been disastrous. The first example is the monstrous title track, built around a hypnotic riff that throbs and pulses before exploding into a crushing crescendo midway through. Second is the inclusion of French rapper Profecy on 'Ruining The Show,' this could have been horrendous but the fusion is absolutely perfect as it renders the break even more potent.

Check it,
http://www.sendspace.com/file/ft6m7s - Kickback - Les 150 Passions Meurtrieres
Kickback are still around, and sporadically surface to play shows, last year in fact, they were out playing live quite a bit hitting the Superbowl of hardcore in NY (lucky buggers) and then the Filled With Hate Fest in Germany (why oh why didn't I say nuts to my dissertation and go to that :( )
Contrary to the fact that it appears that this cd is out of print (although for some people, it is), there are copies of it (and the other Kickback albums) here - http://www.amazon.fr/150-passions-meurtri%C3%A8res-Kickback/dp/B00004XRUK/ref=sr_1_9/171-9537107-1265034?ie=UTF8&s=music&qid=1181067141&sr=1-9

My advice is to learn French and buy that shit immediately.
Posted by xbenx at 6:07 PM

This records is THE record. Every single part of it - the music, the layout, the lyrics, the backing vocals (Moules/Baldur!!) - points to the fact that it is the best european hardcore record ever. I mean, if I ever kill someone, I'll do it with this record playing in my mp3 player.

It's me again. I got too excited and forgot to bring something up.

I read that during the Superbowl fest you mentioned they had opened their set (or one of their songs) with Stephen quoting Carnivore's "Race war": 'This is the United States of America and you've got the right to hate who you want'. Talking about breaking the ice! Fucking classic!

Hands down Kickback is absolutely one of the hardest bands ever from Europe. I've been lucky to ger both albums (both so fucking good) and this mcd on my record collection. This is really fucking evil shit!

Mike, I couldn't agree more, this is so, SO damn good, every track, every minute, just pure carnage, why the hell I didn't go and see them, damn I will regret that forever.

Man, Stephen has one badass attitude, he seems like one aggressive mofo ;)

Damn straight xMarkusx, absolute classic, fuck, I HAD to listen to 'Forever War,' this morning on my way to work, damn, I just wanted to stomp everyone's head in.

I haven't listened to this record in a long time because I like the other two better, but this one is definitely fuckin' insane. If these are in fact going to release some new shit they definitely need to get to it, I agree!