The Blast From The North 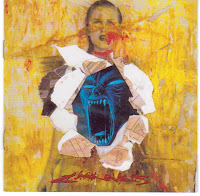 Canvas were a pretty crazy band. Whether it was their demographic lodging that was responsible for this (they were from Leeds you know...) or they were just a little maladjusted, little can explain the outright insanity of their releases. This CD was a collection of sorts, compiling early EPS that were recorded by the erratic Dave Chang, but as Andrew mentioned in his Decimate post on his blog (http://www.aversionline.com/, check that shit people), when that guy got his production job on the spot, it was crushing, just as it is here.

Despite this, and the quality of the material here, this has to be one of the most frustrating CDs that I have in my collection. Of the 10 tracks listed on the CD, 3 are noisy, and in my view, superfluous skits, that add absolutely nothing to the flow of the material, there are just there. Furthermore, another track is a slight remix of the first track featured here, so in the end, there are only 6 actual tracks to enjoy here and that's no way near enough. The quality of the material then heightens the sense of travesty and annoyance as these tracks are complete monsters, crammed to the rim with slamming, not to mention razor sharp riffs, which have a glorious crunch that is potently bought forth through the recording. Then there's the vocalist, maronna santa, if that guy is even able to put together a sentence today I'd be surprised, the damage he must have done to his vocal chords,

For some reason, I never saw Canvas. I knew they were around but I only heard about them upon the follow up full length Lost In Rock's release. That record saw Canvas metamorphosis into something totally different to the band here, exploring some very peculiar tangents and writing songs that were again, demented. Some of the nastiness from their early incarnation remained but was restricted and reduced in presence, replaced by longer more elaborate songs. Although I appreciated the bravery Canvas had to make Lost In Rock, even today, six years since I bought the two records together, I still can't decide whether I actually like that CD, especially when measured up to this.

I heard this band on a Metal Blade compilation of which I own to this day. All that came to mind was holy shit!!! Never bought the album though. Looks like I need to.

Saw Canvas live at the GL summerfest in Belgium, somewere in the 90`s. I knew only ther first s/t album and never heard of their second. So I was a very suprised too hear the complete other sound. The first album is one of my alltime favs, also the cover!