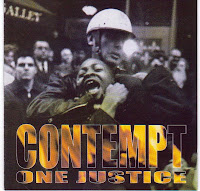 Despite this theme is constantly recurring, I'll stress it one more time, the mid 90s was a brilliant time for music and although I had no part in the world of hardcore during that time (admittedly, I wish I had been born 10 years earlier, then I would have seen our (Italy) World Cup Victory in 82 as well) the more research I have done and the more stories told to me endear me all the more. However, one prominent premise that has arisen to me is that whilst the mid 90s was a great period and produced some extremely powerful, profound music, it is a frustrating period that had many great bands that didn't get the opportunity to fully demonstrate what they could have and should have done.

Tons of my favourite bands from that era were unable to release much material, of course there were the lucky ones, if you were signed to Victory, you had a chance of getting out at least one full length. But for the legions of bands that expired after a demo and a 7-inch, I lament and wish you had stayed together! However, I recognize and respect that there are variables that would have a siginifcant influence on the fate of a band, such as money (lack there of), member drop outs, member conflicts of interest etc etc etc. But I do often wonder whether bands such as Contempt and the countless others would have been able to sustain themselves if they had gone beyond 2 albums, whether they would have absorbed the most despicable trends of that time and marketed them as a 'progression.'

This is all speculative though, but it does pain me to have to ration the music by bands like Contempt, simply because, I love it so much that it could end up being played all the time. This would then lead to the CD becoming 'un-listenable.' Due to every detail being memorized, every beat imprinted so that when it hits it causes a synchronized tap or kick to coincide with it.

The music to be found on 'One Justice,' is pretty much how I imagined it to be due to the label it was released on ( www.xcatalystx.com), the time it was recorded and released (late 90s) and the band's location (Syracuse, need I say more??). Featuring one of my all time favourite songs (the title track), for little more then half an hour, Contempt brutally confront metallic hardcore, questioning the style's integrity, reminding it of its initial intent, of its initial essence and feeling,

It's such a shame they couldn't have continued this.

Now this badboy is still in print, there are copies here http://www.verydistro.com/and here, www.xcatalystx.com/store.

Never heard of these cats. Not bad, though. Reminds me a lot of Arkangel but with a chunkier sort of All Out War thing happening with the guitar parts. I should further investigate...

I'm not sure about the Arkangel comparison, but still, Contempt has some good moments. I wish the songs had more meaty sound and were a little bit shorter.

Another great post for another damn fine 90s label, birthright anyone?

BTW, they used the exact same intro as FCP used on their split. Which brings me to some news for u Ben...because Che is leaving Born From Pain, there will be a special goodbye show with two bands that kickstarted the beatdown scene in Europe, tatataaa: Drift and CRAWLSPACE will be performing at Che's final show!

I was thinking of doing a Birthright post but I figured they are pretty well known and that Id be preaching to the converted you know, anyway, I'm working up on 2 more 90s releases for the end of this week, one which will be quite unusual, so stand by!!!

No more info at this time. CS' guitarist confirmed they will be playing. I sure hope they play their hc stuff. Oh and this is what they're doing right now (something a tad different, hehe):

Keep up the good work, love to hear which bands I missed during my favorite hc era.

I picked up this album back in the day, but haven't played it lately - thanks for reminding me! Mine has different cover art, though. I will have to dig it out when I get a chance.