More metal than your ma's... 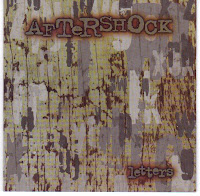 Mix tapes. Remember those? God I do miss them. There was a point from 99 until 2001 where I made so many of them for people (and like wise, them for me) and I would spend so much free time carefully collating a good mix, balancing it and then setting to the task of conceiving it, but now, fuggedhaboudit, damn IPOD'S and you cretins on soulseek, you've ruined it.

The type of mix tapes I received from people varied, thinking back some of the mixes I got…anyway, I digress, one of my favourites was from Mark of Downtrodden in 2001 (now Hellbent Diehard, fuckin check these mofos out, they are seriously lethal, www.myspace.com/hellbentdiehard), who dedicated one side to new school/metalcore and the other side to death/grind. That tape was run ragged, played all the time in my car and it served as a source for new bands, to track down their releases which leads to the focal point of this post, Aftershock.

The track from that comp (Nothing) hit me hard, and began to dig around to find info on the band discovering that 3/5 of them had gone into Killswitch Engage so, wasting little time (as always) I ordered whatever I could find and awaited for the precious package to arrive. At the time, the only CD to be found was their sophomore effort 'Through The Looking Glass,' but no sign of this track 'Nothing.' Further digging let me discover that there had been another full length, this monster, 'Letters,' released on xLifesentencex, but tracking the bastard down has taken until now to do so.

Damn this was a record that was so prototypical, sowing seeds that would be ripped from the ground in the years to come but, in spite of the sheer mass of bands now playing metalcore, none have the sound, the atmosphere of Aftershock. This comes down to two salient factors, the fearsome vocals of Tobias and the cast iron riffs of Adam D.

Now whatever you think of the latter (he certainly doesn't help his personal self image by declaring how he is going to anally rape people's mothers and daughters whilst playing live with KSE), his talent for writing riffs is immense. 'Letters,' showcases some of his finest, they are volatile, they brim with a potent energy that make speakers rumble. Yet, despite their ferocity and intensity, they are so instantly memorable and thoroughly addictive that I have often found myself continuously gorging on Aftershock for days.

So see what you think, and tell me what you feel about the changes in style between Aftershock and KSE, I know that there are variables such as label, popularity and what not that have affected this, but I like to see an open dialogue on how people feel about these changes,

Now, 'Letters,' was reissued as part of a double CD set with all of Aftershock's other material a few years ago, dubbed as 'Propaganda,' which you can still find here, http://revhq.com/store.revhq?Page=search&Id=DHR11


But, if you desire the original pressing, only one place to look peeps - www.ebay.com
Posted by xbenx at 7:24 PM

Yes this stuff is great. Loved Through the Looking Glass too. Great stuff.

While I love Through The Looking Glass and other works, Letters take the cake, it is such a phenomenal record. Candle has inspired and helped me on many levels and still gives me shivers every time I hear it. Awesome band.

We're a bunch of volunteers and starting a new scheme in our community. Your website provided us with useful information to work on. You've performed a formidable activity and our whole group will be thankful to
you.

Now I cant guarantee that you will make money or if the traffic
will convert to leads because there are so many
factors that determine it. Remember, blogging is basically a public endeavor; better know how to deal with the public ahead of time.
These include things like adding videos to
your blog.

NLP behavioural modelling allows us to discovery how we think, feel and behave.
In case you too belong to the community of nail biters, then it is important to know ways to get got rid of
the nail biting habit permanently. First, you must educate yourself on the habit and learn to recognize your own behavior.

I visited several blogs but the audio quality for audio songs present at this website is really excellent.


Visit my blog ... Are All Women's And Men's Clothing Fashion Good Fashion Forward Or Not