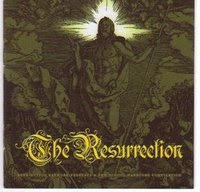 Well, here is the second part of the Resurrection comp tracks as promised and as with part 1, the quality and variation is still very high. The latter part of the disc though features two of the 168/178's more unusual artists, these being Eric (named after Unbroken's guitarist, Eric Allen, nice touch I thought), and Unboy (who also sound a little like Unbroken, especially musically) but coupled with Unboy and Eric are two bands that typify the expected (but not typical per se) Japanese sound, these being Canopus (awesome mix of Arkangel and Children Of Gaia) and God's Heritage (one of my fave Japanese bands, now broken up :(.
So enjoy,

http://www.sendspace.com/file/w7j3ym - Eric - Education Of The Arrow

Again, if you want a copy of the CD (and why wouldn't you???) then hit xHirox up directly at www.retributionnetwork.com, but, I have heard that copies of this will be soon available at www.verydistro.com, so the choice, is yours!
Posted by xbenx at 10:15 AM