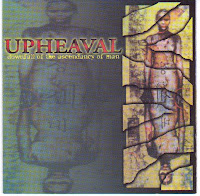 Tracking the mutation of a record label is an interesting endeavor, it can often give one a map or perhaps a better word is a snapshot of a musical environment from a given time. For example Equal Vision was one of the best hardcore labels, and I feel there is no need to do a laundry list of the various luminaries that graced their roster during the 90s and early 2000s. The fact that Equal Vision is now so far removed from hardcore stimulates two hypothesis in my mind. Either they felt that the scene and the bands were on the verge of becoming stagnant and decided to jump ship before the rot set in too thickly, hence their shift in focus to indie/experimental/alt bands. Or they felt that hardcore wasn't generating enough capital and felt that it was time to change their portfolio to save the label.

Perhaps its a little of both or perhaps I'm completely off the mark but one thing I will say in Equal Vision's defence is that they have always looked to sign bands that were distinctive and doing something a little different, and not just sign any old shite (not that I like all of their recent signings). Secondly, they have maintained their excellent aesthetic values with packaging (which really begin to evolve in the late 90s with seminal examples by Converge and Bane). Anyway, as per usual, I'm digressing here, my point here is that labels (like bands) change, and whilst this observation isn't the most astute, what I find interesting is the level of change that a label undergoes. To contextualize my Equal Vision example, lets take a label such as Relapse. Now, Relapse have focused on metal of the extreme nature since its inception, and whilst they have been broadening their palette in recent years, they do tend to stick to music that they know, that they are comfortable with and that is inherently metal but most importantly is inherently Relapse. Whereas Equal Vision have all but abandoned the music that they began with (although I realize that they have recently acquired Modern Life Is War).

This brings me to a label that I have been fascinated by in its shift of musical portfolio, Eulogy, who have gone from releasing New School/Emotional Metallic Hardcore and Emo to focusing purely on tough, moshy bands such as Shattered Realm, Hoods, Bury Your Dead etc, etc, etc!
I have been monitoring Eulogy's activity since around 2000 and became infatuated with the label through the releases by Red Roses For A Blue Lady and then a little later with Unearth and This Day Forward. Whilst in Belgium in 2002, someone (I cannot for the life of me remember who) told me about Upheaval, that I had to hear them and especially the first MCD, released by...you guessed it, Eulogy.

Perhaps not as heralded as some of the other vegan straight edge bands of the time (particularly Day Of Suffering and Morning Again), Upheaval do deserve recognition and credit for the style of music they were playing. They had a really strong grasp and blended well the new school hardcore with tints and hints of black and death metal, so see what you think,

http://www.sendspace.com/file/k9zy27 - Upheaval - Suffering Of The Masses

They would become even more metal on the following full length (which was also brilliant), Testimony To The Atrocities on the very metal, Willowtip.

Both of the Upheaval releases are long out of print, so it pains me to once again offer http://www.ebay.com/ as your first source for looking, I searched around the main distros but came became empty handed I'm afraid, hence why I have posted the whole MCD up here, so enjoy!
Posted by xbenx at 6:02 AM

I didn't know that much about Upheaval and their material didn't age that well imo. I do however cherish some fond Eulogy memories like RRFABL, This Day Forward and Bird of Ill Omen but my favorite Eulogy band of all time must be NEW DAY RISING, I mean, they were so ahead of their time and delivered music that greatly outshines that found on a little album called 'the opposite of december'. To me they laid the foundation of all things emo/metal/core that would follow. Your NDR thoughts Ben?

Tim, shit dude, how the hell could I forget about NDR!!!! Damn, they were a great band and soooooooo underrated, good spot!!

So how do you rate the upheaval material?? I love this stuff, I do agree though, it sounds quite archaic today but I think there is a charm about that that makes the material alluring to me!!

I love Upheaval, but for the record they were certainly a vegan band but not all members were sXe.

Actually, all of Upheaval were vegan sXe for the MCD and still sXe but not completely vegan for the full-length, if I remember correctly. The very last vocalist wasn't sXe, but he only did vocals for one show before Upheaval broke up.

I know this because I played guitar in Upheaval and I wrote most of the music and most of the lyrics.

To me, veganism was the most important part of the band and I made that my focus. As each member sold-out veganism, it made it harder to do the band. On a personal level, it was their choice and I didn't care, but in relation to Upheaval, it killed me. So, when I was the last vegan member of Upheaval, I quit the band and it was over.

I agree that the songs on the MCD don't stand the test of time very well, but think the full-length does a better job of that.

Anyway, I just stumbled across this post and wanted respond. It's kind of weird seeing people talk about a band I played in so long ago. Thanks for bringing back some memories!

Hot Damn!! Nathan, thanks for the feedback and background on the band, and I am glad that I stirred so memories, so what are you doing now, and what have you done since Upheaval? Also, I beg to differ, I love the sound of the EP, although I love the full length too, did you ever have any other material that you planned to release?

This is the music! It's not Suffocation but still loads of respec must go to those blokes! Mash it up!

Heh, i didnt notice you had posted this waaay before i did, good shit anyways, i've been trying to find the full-length with no luck.