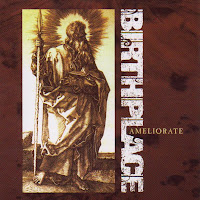 Coming from the same scene as Statecraft, Birthplace are one of the older bands from the 168/178 area of Tokyo. Like the aforementioned scene Godfathers, the latter has progressed incredibly from their primitive beginnings. Early Birthplace was much like the formative years of a child, they had energy, bundles of it in fact and they had a sense of direction but one that was fraught with distraction. This often lead to them losing their composition and form in their early material, thus making the impact less significant and their music not as strong as it should have been. However, through patience, perseverance and countless shows and practices they have blossomed into one of the finer and certainly more elegant Japanese bands on this, their first proper full length 'Ameliorate.'

The catalyst of this manifestation of elegance has been through Birthplace's masterful command of melody within their pieces. Whereas the majority of the 168/178 bands tend to not overly indulge with melody, (Endzweck being the one other exception together with Birthplace), this command that Birthplace possess stands as one of their most distinctive qualities. Their approach echoes (but doesn't mirror directly) that of Shai Hulud, a band that most will know, are exceptional in their utilization of melodic elements in that they create an entire sound where melody is rooted within. Likewise Birthplace are able to, like Hulud, immerse their melodies so that they are not an external connection to the music but are wholly integrated to become a key component of the musical flow. Another asset to Birthplace is their vocalist, Knight. His powerful bellow is somehow able to naturally fit into whatever stage the music moves to, be it a moment of calm introspection or brute force, never once sounding unnatural or forced,

http://www.sendspace.com/file/9pm0ny - Birthplace - From The Neverending

Seeing Birthplace last year at the Bloodaxe fest in Tokyo was incredible, their songs were already extremely vibrant on CD, but live it was an inferno and the small room convulsed with excitement throughout their way too brief set

Tracking down a copy of this record is not only worth it but shouldn't be overtly taxing, try the band's site here - www.myspace.com/birthplace or hit up http://www.retributionnetwork.com/ and ask xHirox if he has any copies or can get you one.
Posted by xbenx at 7:22 AM

Hello, i would warn you, the links are dead, can you re-upload them please ? Thanks a lot !

Or can you send me the album to my e-mail adress please ?