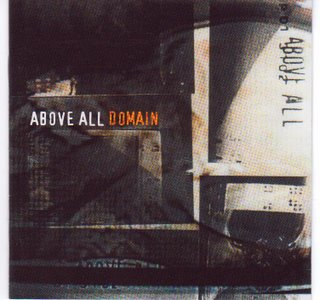 Well, after many false starts and much frustration with this blog I think it will finally get going in 2007. As promised in the dying months of 2005, I would be featuring for the majority of posts items from the world of metallic hardcore and one couldn't wish to start in a more obvious manner with the choice of this gem.

Above All were one of the first UK heavy hardcore bands, precedeed only by the likes of the enigmatic Ironside. They released a 7 inch on the almighty Sure Hand records and then bought forth this metallic monster on, of all labels, Roadrunner.

Unfortunately when this came out (1996), it was well before my time of being involved in UKHC so I can't really provide much primary background of what was going on (meaning that what I know wasn't experienced first hand but cobbled from various sources over the years). What I do know is that from around 96-98, UKHC was thriving with countless bands spawning all over the country and Above All were considered too be the absolute pinnacle of that talent.

They took all 3 tracks from the 7 inch and bolstered them with 6 new cuts for this full length. Being the mid 90s, the influential shadow of Earth Crisis is cast profoundly on the material here, especially on the final track 'Empire,' which has plenty of sumptious riffs that echo 'Destroy The Machines.' Additionally there is an apocalyptic feel to the material, reminding me of the almighty Overcast, although Above All weren't as technical as the Bostonians, they share that urgency and aforementioned 'apocalyptic,' quality that gives their work a definitive edge in terms of impact and memorability (the songs from this record are constantly stuck in my head).

Also, I am planning to post the tracks from the 7 inch to show a contrast, especially vocally, those will be up soon but before then, other obscure items will be posted!
Posted by xbenx at 8:34 AM

FUCK YES. Dude, this shit is awesome and I had never even heard of these cats. I love it and I'm gonna buy it. 'Bout time you got this shit rollin'! Keep it up. I'm gonna email you in a sec...

You should write for a website or something-any old douch can do it-look at me! Seriously -try it.