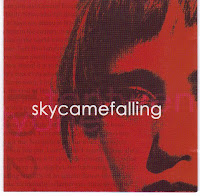 Where to begin with this album? Yet another one that has been with me through good and bad times since its release in 2000 and one that has remained one of my favorites and most played since then. Firstly I think should contextualise Skycamefalling's position in the hardcore landscape. They released their first MCD on Goodlife in the late 90s, around 1998 if I'm not mistaken, it set them as one of the bright new voices of the metallic hardcore explosion during that time and one that had competently grasped the tricky equilibrium of beauty within chaos. Enter the year 2000 and the band bought forth this masterpiece, on Ferret, back when that label were only really interested in metallic hardcore.

10.21 was just shy of an hour in length but despite the longevity, it never drags, never wastes a second to maximize the impact of every note, every beat, every lyric. What makes the record so alluring and addictive is something that I have mentioned before, this being its flow. Skycamefalling were more then adept in composing a flowing record that made it mesmerizing, especially during pieces such as 'The Truth Machine,' and the title instrumental track.

I challenge anyone who denies the credibility of this release, it is a masterwork, and deserves to be owned by anyone that is an enthusiast of metallic hardcore,

Finding this record is not going to be easy, I believe Ferret were going to be releasing it with a series of other older records on http://www.itunes.com, failing that, keep checking http://www.ferretstyle.com for updates.

However, there are 3 copies of the records reasonably priced here, www.amazon.com.

Tragically, Skycamefalling broke up in 2002, playing their last (but also first) European show at the Goodlife New Year's fest. Luckily I managed to attend that show and see of one of my most adored bands. Amusingly, I remember some of the members of the band coming to the house where I was sleeping that night, and talking for a good hour and a half to my friend who was letting me sleep there, me, completely exhausted from a day of travelling and dancing was itching to get to bed, but the skycamefalling boys were intent on keeping me (and Birgir) up until the smallest hours of that dark Belgian night, after all, it would have been rude of me just to go straight to sleep on the couch...
Posted by xbenx at 6:49 PM

I absolutely adore this record. Their last self-titled two-song EP was great too.

again another great post, i just thrown this in my ipod last week and i'm enjoying the listening as in the good old days!!!!

You're so right on this, never again I've heard a band that made metalcore sound so organic. When I put on that record it's like a one hour journey I go through. Mad props fro bringin this one to some people's attention. Their last two songs were also great!