Veering Toward The End 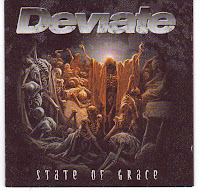 Belgium was one of the hardcore Meccas in Europe during the 90s. The early 2000s weren't kind to Belgium though, as there was a severe lack of new blood coming through, fortunately though, in the past few years, old veterans (Arkangel, Congress, Liar) and the next generation (Whatever It Takes, The Boss, Die My Demon), have hit back with stellar records and proved that Belgium is far from a spent force in the Euro Hardcore scene.

The mid to late 90s was its heyday though, epitomized by the H-8000 explosion. However, not all of the best bands came from the heralded H-8000 area. One of the best but often most overlooked and therefore least well known (and appreciated) was Deviate. They were also one of the most prolific bands in terms of putting out records, trust, they didn't need 5 years to follow up an album (Arkangel I'm looking at you and still waiting for the alleged split with Kickback...) and showed a genuine progression from each release. 'State of Grace,' is by far the most complete Deviate album and certainly their most metallic. Its crammed with pummeling, chugging riffs, slamming breakdowns and plenty of heaving double bass, and when all these elements amalgamate, they create a fearsome, crushing metallic hardcore onslaught that is seldom heard these days.

Most importantly though, these are songs that get stuck in your head, and stay stuck for days,

I don't recall exactly when Deviate decided to break up, it was around the time their last full length came out in 2002 (The Red Asunder, a very interesting record). From the fallout vocalist Danny went to pursue the awesome Angel Crew, and guitarist Kirby was already a member of Arkangel and Length of Time (who have reformed for one show in Belgium in March, hopefully they will do a record...).

This record isn't too hard to find, if you dig the tunes, you'll find it here for a paltry sum, http://www.verydistro.com/search.aspx?typeofsearch=artist&keywords=deviate

Yes! I love this album - it is Deviate's best work and a killer record! Nice post.