The storm of a season 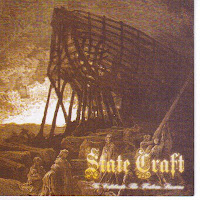 The second of many features to come on Japanese bands, in fact, I should have started with this record first and then moved up to the Loyal To The Grave release. Never mind, things happen for a reason, or some I'm told...Anyway, enough senseless ramblings, background. Statecraft were one of the (if not the) first heavy hardcore bands from Japan. What is indisputable is that they were the first too be playing the 'new school,' hardcore sound, patterned by the likes of Morning Again, Culture, Day Of Suffering, Upheaval (and countless others) etc. They debuted with their first MCD in 1996 entitled 'Never Forget.' Little over a year later they dropped their next MCD on the now deceased xlifesentencex recordings. They become a stable in the Japanese hXc, and believe me, some of the shows from the 98/99 years were chaos, not that I was there, but I saw the pictures. In 2001 they played one of their final shows with the almighty Aftershock and then disbanded, with both guitarists going into Loyal To The Grave.

At the height of their popularity, Statecraft bought forth their only full length, 'To celebrate the forlorn seasons,' during the peak of Belgium's Goodlife Recordings (1998-2002). Today, almost 6 years since I bought it, this record stands as one of my favorite releases of all time. I've lost count of how many times I've listened to it since I bought it way back in 2001 (how time passes) and have many romantic memories of those early years of this decade that are connected to this record. Back then, what first struck me was that this band was Japanese, not European or American, but Japanese, now bearing in mind that my musical knowledge was in its formative stages I was not privy to knowing much about music from more exotic demographics.
Upon putting the CD in my hi-fi I was astounded further, the music was incredible, the lyrics were honest but also serenly uplifting and the packaging was something else too, to that point I had never seen a hardcore band with such unusual artwork which conjured presupposed images of a land that I knew nothing of but felt I now had a piece of it in my hands.

The music itself is monumental, goddamn, its sooooo heavy it moves mountains, but its not just brute force, laced amongst the mayhem are gorgeous harmonies, sharp leads and sumptuous melodic riffs that are concocted from so many different influences that they take a shape all their own. The aforementioned new school bands such as Morning Again (especially) and Upheaval (likewise) were influential, but also the band drew inspiration from sources that were more metallic such as Malevolent Creation, Morbid Angel, even some black metal bands.

Truly these are some of my favorite songs, they've been with me whilst I was commuting to my shitty full time jobs in 2001-2002, through when I was studying for my degree and wherever I have managed to travel since getting my IPOD at the tail end of 2003, thus, enjoy,

Definitely keep the Japanese stuff coming. This is one of the only other bands I was familiar with from Japan, but I don't own any of their material either, because I guess I suck, ha. This definitely has a major Euro sound to it, you're right.

Trust dude, lots more of this coming, and this shit is furious!!! You gotta pick it up :)