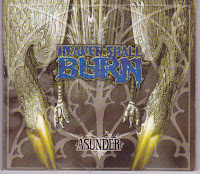 Germany was responsible for upping the metal factor in the new school sound in the late 90s thanks in large to Caliban and these vegan warriors, the almighty, Heaven Shall Burn. For me, Heaven Shall Burn pre-Century Media were the rightful successor to Day Of Suffering as the quintessential vegan metal band. Whilst now they are more like a straight melodic death metal band, back in the late 90s HSB were causing absolute destruction with their material. Melody was an integral feature that helped them to conjure their pieces but it wasn't utilised in such a manner that lightened the atmosphere (like later material), rather it aided in creating an even darker atmosphere that enhanced the feel and impact of their pieces.

Now I thought this was out of print, hence why the whole thing is up (sans the 25 minute track at the end with a hidden bonus cover) but it turns out, it is available here http://www.verydistro.com/moreinfo.aspx?id=1515.

My opinion is that HSB is one of pioneers of real metalcore and they did enough to make many bands feel stupid and lame. They've taken a lot good from Bolt Thrower and Amon Amarth and add hardcore feeling to it. That's a mix.

Although I think their newest albums are better in terms of sound and writing I reckon Asunder is a great stuff. There's actually much more metal here then in many metalcore records.