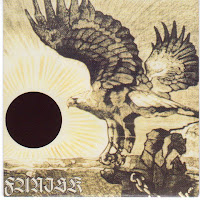 Reaching back into the folds of memory, I recall that when my interest for black metal began to ferment (around 1999/2000), American bands weren't held in the highest regard. Granted, there weren't very many of them, but those that were operating simply couldn't hold a candle to their European peers.

Post 2000, this began to change when artists as diverse, not to mention classy, such as Weakling, Leviathan, Xasthur, Nachtmystium and legions more, commenced a bloody crusade to not only establish credibility for American black metal but show their peers that they could create their own sound which didn't rely or attempt to mimic that of Europe.

Be it the psychedelic blackened other worldliness of Leviathan and Xasthur or the grandiose brutality of Weakling, the releases by these bands (and others) have become staples as well as hallmarks of the black metal genre. Furthermore, the likes of Xasthur have gone on to cause controversy by switching labels, being 'appreciated,' by trendy rags and declaring all out war on pretty much everyone that has tried to halt or demean the band's progress. This confirms that USBM no longer has to look over its shoulder to examine what's going on in Europe, they can look to trace their own path without that need to acknowledge (or in fact respect) their peers.

One of the strongholds of USBM is the West Coast, both where Leviathan and Xasthur reside but also the focus of this post, Fanisk. Like their contemporaries (especially Weakling and Velvet Cocoon) Fanisk are shrouded in mystery, the members choosing pseudonyms and numerically titling their pieces. The music itself is even more mystically. Each piece if a vast, ambitious canvas that works within but more so beyond the constituents and constraints of black metal. The result is that each song is an ominous but enticing beast, fluctuating and oscillating through various moods, riffs and melodies but always coalescing poignantly so that coherence is maintained.

Locating this one is not going to be easy, I suggest to try the band directly www.myspace.com/fanisk to see if they have any copies left. I know that http://www.supernalmusic.com/ had some copies but I fear they have disappeared. Otherwise, you can consult http://www.ebay.com/ to see if any copies arise.
Posted by xbenx at 1:42 PM