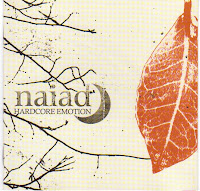 God how long ago it seems since the heady summer of 2003 and what great times, I was looking forward to a long break after my first year of college and the Goodlife summer fest was placed at the pinnacle of that summer break. A big crew from the UK headed out and we all met up to enjoy the likes of Congress, Liar, Die My Demon, Shai Hulud, Heaven Shall Burn, Arkangel etc, etc. It was a great line up and a great fest but one band that surprised everyone there was this mysterious Japanese entity, Naiad. They had flown out for this one show and stole the fest from pretty much all the big names present (which included The Haunted). The appearance (and release of the MCD) was one of the big factors for Goodlife on this fest, and after the performance (and then buying the MCD and listening to it after) its not hard to see why, Naiad were incredible live, pulling in pretty much everyone in attendance with their mesmeric show, which included a burning of incense (if memory serves me correctly) and hypnotic visuals before each member plunged body and soul into a half hour catharsis. Even Shai Hulud (who headlined on the same day) had a tough act to follow (but were still great) as Naiad had truly, stolen the show.

But none of this truly reveals the sound of Naiad.

Well, they managed to concoct a rich, vibrant musical tapestry that is seamless in its execution. In spite of the moments where they swing from melody to mayhem, each transition is so smooth, so lush, that it made the record finish way too quickly. At the time, the band was compared to the likes of Hopesfall and Poison The Well, two fair comparisons due to the mingling of beauty and brutality, but Naiad were no mere impersonation of those two Stateside giants, rather, they were their own, independent entity.

This is still about, and there are copies here, so if you feel it, pick it up - http://revhq.com/store.revhq?Page=search&Id=ED091

Naiad unfortunately disbanded in 2006, a full CD was set for release but the band imploded due to line up problems and thus decided to cancel the release of their full length. A real shame because the potential on this MCD hinted at vast and incredible possibilities.

Still if you enjoyed this, then you should scroll down and check out Birthplace who play a similar (bit more aggressive) style and are still together.
Posted by xbenx at 8:05 AM

Great band, sucks I never saw them perform. These Japanese bands take the foundation formed by western bands and fill them up with their own intracies, really cool. Oh and Ed Goodlife if you're reading this: BRING BACK SUMMERFEST! Ieperfest, pressure, andwhatnot got nothin' on a summerfest from goodlife!

Tim, it was a great show, I still have vivid memories of it even now. Yeah Summerfest was great, but Pressurefest was wicked two years ago and im going this year so i expect it will be another great 3 days ;)!