How the mighty fall 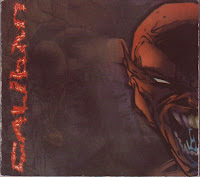 I wanted to do this straight after the show Caliban played last Friday but time constraints have restricted me from doing so, but better a little late then never and the show is still fresh in my mind.

Caliban were an important band for me, back when I was beginning to discover the more underground metallic hardcore bands at the start of this decade, they were one that I become enamoured with instantly. Thanks to 'Vent,' 'Small Boy and a Grey Heaven,' and the split with Heaven Shall Burn, they fast became one of my favorites and then when I saw them in 2002, first in London then at the Stormfest in Belgium they solidified their position in my eyes as one of the best European bands.

But what the hell happened? They have managed to sully their reputation and everything they worked for in the past 3 years by releasing terrible albums, desecrating their older material on the second split with Heaven Shall Burn (which if you bought solely for the Caliban material...look I aint going there, I'll just say that it wasn't good), and have become more increasingly sterile, lifeless and above all painful to watch each time they play live. Case in point being said show show last Friday in London with Bleeding Through and All Shall Perish (who smashed it), where for the entirety of their set, I was left wondering A) why does this band continue, and B) why am I here watching this? I stayed to banter with some old heads and call out for old songs but after the final song being I made a swift exit from the venue, trying not to get swamped by the amount of excess hair flopping around from the dodgy toni & guy haircuts.

In spite of these ill feelings towards the current Caliban, it doesn't stop me from regularly spinning their material up to and including 'Shadow Heats.' For years though, one record eluded me, one that I couldn't profess to owning and one that I always wanted to have so that I could complete their golden period. So the above rant has been a precursor to the real focus of this post, the self titled EP from 1998. Tracking this bastard down has not been easy nor economical, thanks to http://www.ebay.de/ I finally managed to do so this year thus ending years of searching and years of frustration (once I thought I had found it but when the package arrived, it was another Caliban, one that played Celtic folk and with the worst cover art ever...).

Of all of their output, this EP is certainly their most visceral, bestial and direct, its hard to believe that the same man who now strains 'WHERE IS YOUR LOVE???' was responsible for the demented shrieking found here. Musically this is mid 90s new school hardcore bastardized and defiled, made even more intense and destructive but also coursing throughout the EP's duration is a very sinister atmosphere and feel of the material. At times they remind me of Abnegation here especially the 7 inch that band released on xcatalystx.

Although it has been elusive to me for many years, http://www.ebay.de/ is definitely the best place to source it, I have seen 3 copies of it go on there this year, so even though there were apparently only 1000 copies made, they are out there in circulation, it just depends if you want to pay the hefty price...

In terms of Caliban's future, I presume they will continue producing the material that has been present on their past 3 releases, they announced at the show that a new album is all set for April, where vocalist Andy declared that it will be 'kick ass metal.' No doubt there will be metal, no doubt it will be heavy, but whether it will 'kick ass,' is another matter, rest assured, I won't be itching to find out.

man, i love your blog in just a few posts...

i was too a huge fan of caliban in their early years, and i bought everything from them until vent, which for me was their first weak(to say the least)album...

man, i remember i bought it straight from the guitar player in a tiny show in madrid, and a few years later i saw them in a big fest with all the cool goth-core-possers looking at them...

and i suddenly felt so old...

something about jane, absidia or shaft in a following post?

Thanks for the comment, I do appreciate, I got some more good shit coming, so stand by ;)

You know I hadn't thought about posting on any of those bands, but good call!! Especially Jane, and as for Shaft, I don't have much material by them only the split with Jane and their EP called Taskmaster, did they ever do a full length?

As for Caliban, I know dude, its horrible what they've become!!

"its hard to believe that the same man who now strains 'WHERE IS YOUR LOVE???' was responsible for the demented shrieking found here."


Not too hard to believe, since it's a different singer. ;-)

Matthew, really???! I always thought Andy was the only vocalist Caliban had, and I just checked the MCD lineup and the vocalist was called Andy...so if that is the case, that the vocalists are now different, then I stand corrected!!!

I just learned about your blog from aversionline.com - this is some great stuff. There is a lot of stuff on here that I have wanted to hear - especially the xClearx and Another Victim. I was really excited to see this Caliban, but only 1 of the song links work! Can you re-up these songs? I have wanted to hear this for a while now, as I love the old stuff and hate the new. Thanks!

Thanks for fixing the links! I've wanted to hear this for a long time.