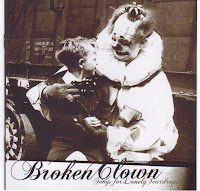 Clowns. Hate em. Ever since seeing I.T. (and a few other cinematic atrocities where clowns were involved) coupled with my earlier encounters with them (at parties, come on, everyone during their formative years went to, or had a party where a clown was present) my feelings towards them have taken the form of nothing but pure vehemence. The idea of them, the point of them, goddamn, the mere presence of a clown, anywhere just makes me curl up in a ball, wishing that it would disappear into a very deep, black hole. So when I heard that members of Arkangel and Moules from the mysterious Backstabbers (has this band ever released anything??? If anyone knows then fill me in!!) were getting together under the name of 'Broken Clown,' I was perplexed, thinking "What the hell could this possibly sound like?? Arkangel with circus music???!"

In spite of the moniker, Broken Clown and the feelings of trepidation that were coursing through me when I bought this CD were surprisingly (and gloriously) quashed by the band's fluid and potent mix of doomy, miserable yet driving rock that fleshes out this EP's duration. Moules really excels here, usually I'm accustomed to him wrenching his guts out (he can be found on the last Arkangel full length and Kickback's 'Les 150 Passions,') but here there is not a trace of his former self to be found, rather, he moans, mumbles and drawls his way through the material which coupled with the sludgy but tuneful riffing creates a sizable emotional weight that becomes enticing and hypnotic and draws you in to his wretched world of love, loss and depression.

http://www.sendspace.com/file/j3f6aa - Broken Clown - At The Surface

http://www.sendspace.com/file/6u9jz8 - Broken Clown - Who The Fuck Is Mary?

Now distros in the US (as far as I have looked anyway) seem to be carrying this, the only outlet I have found this far is here http://www.goodliferecordings.com/webstore/, alternatively, you could try contacting the band www.myspace.com/brokenclown, to see if they have any copies left.

The band have been threatening to bring forth a full length for some time but there is still no sign of it, hopefully it will see the light of day before the end of this year, in the meantime this will have to suffice.
Posted by xbenx at 9:49 AM

I buy everything that has Kirby's guitar in it. I like this MCD a lot although I had to get used to Moules' voice on this one. Quite a departure from his previous roles in Backstabbers and Kickback's and Arkangel's backing up parts. He can't sing in clean voice, that's for sure, but still it's attractive.

Too bad they didn't put lyrics on the cd. According to Kirby Moules didn't want them there.

My older bro got to see Broken Clown in Bristol last year. He enjoyed the show a lot. I too hope to see their full length soon.

Speaking of Moules, he's also on1 or 2 new Arkangel tracks backing up Baldur (they have 4 new recorded songs that were supposed to be on split with Kickback). Shit, the new songs are so good. I'm dying to hear them again on a proper release.

Haha, Mike, I think if you started drinking and listened to broken clown you'd pull out a very large razor and slash up your wrists!!!

I agree, he can't really sing but his mumbling and drawling really works with the music.

WHats the deal with Backstabbers?? Did they actually release anything??

And whats happened with the Kickback split, that should have been out ages ago!!!

Arkangel recorded their part of the split, Kickback didn't. I don't know what's the current status of the whole idea.

I do have one Backstabbers mcd in mp3 (at least it says it's Backstabbers). Very decent stuff! I'll upload it on rapidshare and post the url later this evening.

Wait, it went really fast so here you go: http://rapidshare.com/files/28750881/Backstabbers_-_Self_Titled.rar.html

Mike your a gem. I've been looking to hear BAckstabbers for a very, very long time, thank you very much!!!

Backstabbers released a mcd/10" vinyl in the late 90's, think it was on Steffen's Hardway label, distributed by a french Major - France only.
I believe there was only one pressing of either format so it went out of print immediately.

In case anyone cares, i think i'd be willing to part ways with my 10".

The Clown has some new demo songs on the myspace webpage: http://www.myspace.com/brokenclown

If this gets recorded in some decent studio, we might get some really good stuff.

the Backstabbers EP in on their myspace
http://www.myspace.com/backstabbersbxl

Kickback are still alive, seen them live in Paris a few months ago, they're recording something new (wow!!)...and the new Arkangel is already out in Belgium, June for the rest of the world (the new track on their myspace is promising)