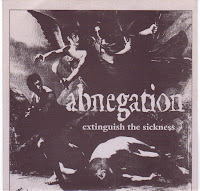 Bloody hell this has been a fucker to get up today, clearly my pc doesn't like the 'Verses Of The Bleeding,' tunes. Minchia. Anyway, of all the 90s bands that I have become most obsessed with, Abnegation rank near the top, due to the rumours and stories that this band have caused because of their music, because of their politics and because of their history. Whenever I have quizzed anyone about Abnegation, I have received a cast iron opinion, that is either one of praise or one of sheer hatred. In regards to the latter, the reasoning stems from this due to their views as well as the absolute abomination of a full length that they released in 1997, even though I, like many others, don't consider that album as the true Abnegation. Hence, this post features cuts from their golden days and from the full length so that a fair balance is maintained but also to show the (not progression, far from it) the direction the band took in their twilight period.

'Extinguish The Sickness,' is one of my favorite 7 inches. The amount of times I have spun it now even surprises me, more so if the queasy feeling of excitement that enters my stomach each time a song starts. On this release the band had excelled from their demo 'Life For A Life,' which was bestowed with a sincere energy but lacked quality songs. For 'Extinguish,' they took the raw materials from the demo and unearthed (probably from the depths of hell) some of the hardest riffs, poignant lyrics and punishing beats from the mid 90s. Fuck. If only this band could have got a good deal and released a proper full length at this time...


http://www.sendspace.com/file/dz9dvz - Abnegation - In The Eye Of The Storm

'In The Eye Of The Storm,' was actually the second track on this 7 inch, but the version I have included here appeared on the 7 Inch of the same name released by Enigmatic records in 1995. Musically it is of the same ilk as the 3 other cuts but with the 'harsher,' vocals that Iggy employed for the remainder of their releases with him on the mic.

I have seen 'Extinguish The Sickness,' on www.ebay.com a lot recently, so keep watching there for it. 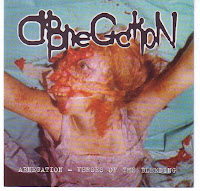 Now, that abominable full length. 'Verses Of The Bleeding,' reared its ugly head in 1997 and by this time, the line up had drastically changed. Vocal duties were handled by Dave Steele after Iggy left and Doug Corey became the band's sole guitarist after Paul Nowoczynski jumped ship. The notable progression that the band choose here was to gorge and overdose on their metal influences and to eradicate any trace of their former 'core,' self. What was left was a sludgy, primal and very primitive. The tracks that had began to earmark this progression were also featured (but re-recorded) here, one of them being 'Hopes Of Harmony,' one of my favorite Abnegation songs but was completely desecrated for this full length.

Anyway, make your own minds up,

http://www.sendspace.com/file/z8kp8l - When The Smoke Clears

http://www.sendspace.com/file/9x1605 - Verses Of The Bleeding

If you do like this record, then it is readily available for a cheapo price here - http://www.verydistro.com/moreinfo.aspx?id=1021.

the intro part in "In The Eye Of The Storm" is fucking awesome. I love the druming and crunchy guitars. The shit sound dirty and tight at the same time.

I remember listetning to "Verses of the bleeding" for the same time. My god, what a blast that was. I thought they were still vsxe at the time, they just went 110% metal music- and lyricwise. Anyway, I also remember Ed GoodLife disowning them and explaining himself that he didn't know they weren't the same band anymore. Good times, good record. I like it. The openeing part in "When the smoke clears" kills!

Mike, thanks for the comment, I can't agree with you about the full length, I find it such a painful listen, why they couldn't have done a full length in 94/95, GRRR, it makes me mad!! Keep the comments coming, and I've heard that some people have been having trouble posting comments. - xBenx

I've never been much of a metalhead, so my views on "Verses..." might not be an expert opinion. I was definately impressed with it at that particular time. I had a soft spot for anything controversial back in the day and this album made them even bigger in my eyes haha...

Thers's some Abnegation live footage floating around on youtube. Sweet.

Anyway, I'd love to see more Euro bands on your blog, like H8000 or Brussels stuff.

hey man. yeah the full length was a big let down and should have been the full length you were saying you wished for. i think the distance of paul living in pittsburgh and the rest in erie took its toll and with him leaving to join chapter/creation is crucifixion a big gap was left with abnegation. i saw them a few times with a revised four piece line up and then only once when it was just just the three piece. pretty rough.

ps. it's funny because i made the cleveland fest three song rip from a tape of mine for this dude in japan and now it is everywhere. good to see that stuf fout there. i think i still have pics from that show as well.

Mike, again thanks for the comments, appreciated, I have seen that Abnegation footage and its raw, love that shit when shows are played with the lights up. There will be some more Euro stuff going up Mike, so watch out.

Awakening, yeah, its a damn shame, ma, c'est la vie, and your footage is sooooooo good, who else played at the Cleveland fest??

clevo fest was pretty good aside from the fight the one night.

man, band i can remember at this point are day of suffering (right after the name change), autumn, prevail, catharsis, integrity, new day rising, man a shit ton more.

"I've never been much of a metalhead" said Mike - a man who was listening to Dark Funeral with a candle lightened up in his room.

Your blog keeps getting better and better! Your older articles are not as good as newer ones you have a lot more creativity and originality now keep it up!

Hm hm.. that's quiet interessting but frankly i have a hard time determining it... I'm wondering what others have to say....

Good Day i'm new here. I came accross this chat board I find It quite helpful and its helped me out a lot. I should be able to contribute and assist others like its helped me.

Cheers all, See Ya Later.

Hey i am new on here. I came upon this site I find It extremely accommodating and its helped me a lot. I hope to contribute & aid others like it has helped me.

Thank's, Catch You About.

This is the kind of thing I try to teach people. Can I count on a sequel?

Story, i enjoyed sharing this.

hello there thanks for your grat post, as usual ((o: