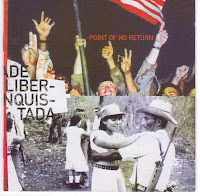 Third world hardcore. There's an endearing thought and one that perhaps encapsulates purely what hardcore is meant to be, heart, soul and pure passion, all of which come in abundance throughout Point Of No Return's swansong record 'Imposed Freedom,' from 2002. Easily the most influential and perhaps best (although I still dispute this inside my head on a regular basis) hardcore band from South America, Point Of No Return, even in their formative days, were no poor imitation of the States and Europe. Granted there were prominent influences running from those demographics (especially from bands in the New York area and not just Earth Crisis) but they took these elements and sculptured them into their own entity that was relentlessly heavy, overtly confrontational and absolutely fierce. Coupled with the band's seething intensity was a pitch black atmosphere that engulfed the material, making it all the more urgent.

The progression that the band made from each release was astounding, as each element was given greater emphasis in the context of a piece. One of the band's greatest strengths was their mastery of how to expertly utilize three vocalists. Each one had his own unique aesthetic trademark but rather then merely have them separated, hammering out a line in turn they would overlap, butt in and appear without warning whilst another was still screaming. However, in spite of this sporadic approach a smooth flow was consistently maintained and added to the texture of feel of the songs.

The band played their final show at the Liberation Fest in 2004 alongside various other great South American bands (such as Children Of Gaia, Nueva Etica etc). Apparently they were due to release another album in 2004 but this as of today has still not been released although I have been told it is coming.

Luckily, it looks like this record (and their other awesome full length) is still available here, http://www.verydistro.com/search.aspx?typeofsearch=artist&keywords=point+of+no+return

I was sick to discover recently that the band played Ieper Fest in 2002, if only I had known.
Posted by xbenx at 7:19 AM

I got to see them 4 times, I guess. 2 times in Poland, once in Germany and once in Czech Republic. I remember seeing them for the first time. I didn't know anything about them at the time and shit, I was impressed. I shared some of their politics back in the day and it only enhanced my apprectation of the band.

Regarding the record, I liked their "Sparks" cd better. "Imposed Freedom" seems less energetic and more sinister. I prefer them playing faster tempos. Nevertheless, this was great band.

Oddly enough I was just playing this for my roommate yesterday. He still thinks the new Nueva Etica is better, although I disagree. From what I've heard, they had about 10 or so new songs written for a final album but never recorded it; if & when they do, it will allegedly be without Marcos (of Liberation Records) on vocals). All just rumors, of course, but that's what I've heard.

Mike, you lucky lucky bugger!! I would have given my right arm to see that band!!

I agree that "Sparks," is more energetic but I way prefer the feel of "Imposed Freedom," I was going to do both changed my mind, 7 inch is great too.

YOsef my man, thanks for the commentage again :) I love Nueva Etica, especially the CD on catalyst, but I agree PONR are better.

What the hell has happened to Marcos?? Clearly the almighty dollar has taken over at lib, its just a vehicle for trustkill and century media to distribute records, proper shitty.

Your right, I stand corrected, I got mixed up (or probably distracted) when typing this up, I think 2004 was a comeback show and then the 2005 lib fest was the last show.

Thanks as always for the comments!!

I think the first time we seen PONR it was in Poznan (Poland) some time ago. That was something special. Actually at that time nobody knew them. Nobody knew what to expect. It was a killer. I think both records, "Sparks" and this one are really great.