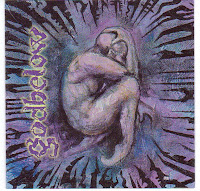 Isn't it frustrating when a band is before its time? Even when you know that this band is so good and that they should be big, they end up fading into obscurity and vanishing from the memory of those who did care. Godbelow were one such band, making brilliant, inspired music that wasn't gaining much recognition outside the confines of their recognized boundaries (i.e. Syracuse). Long before the likes of Every Time I Die (and tons of other metal and hardcore bands now in circulation) were dropping cheeky southern runs and riffs into their tunes, Godbelow were churning out their molten metallic crunch with dirty southern riffs and harmonies but what did they get for it? Niente, nada, absolutely nothing.

To be honest though, 1998 wasn't the best time to be forming a metal band, especially one that was sans rapping, bad hairstyles, worse clothes and redundant, tuneless music. There wasn't also the prosperity of labels like Metal Blade signing every band under the sun. Hence this explains how Godbelow ended up on the tiny Surface Records and also why their records are almost impossible to find. Anyway, back to the band.

Godbelow were something of a Syracuse supergroup, formed from the shards of several awesome bands. The most notable members were Kris Wiechmann, formerly of Earth Crisis on guitar and Dan Johnson, ex vocalist of Blood Runs Black. Before going into record this album Wiechmann left the band, but then re-joined later to bolster back up again to 3 guitarists. The record itself was full of gorgeously thick riffs that were as bludgeoning as they were graceful and when coupled with Johnson's wrenching vocals it made Godbelow a fearsome musical monolith.

I've decided to split the tracks I uploaded into 2 lots, otherwise it would have been a single 40MB file to download,

How is this new arrangement working for people?? Do you prefer it like this or as single tracks?? Let me know.

This one is another that is stupidly out of print, god knows why as it is totally genius, but I have seen their stuff on http://www.ebay.com/ quite a bit.

Post Godbelow, most of the band went into the rather tame Brand New Sin which was far more rock. However, Dan Johnson and Godbelow's drummer Joe Murphy have gone onto form the mighty Unholy (if you haven't heard them, go immediately here, www.myspace.com/unholy) together with the riff monster Jonathan Dennison (Another Victim, The Promise, etc) and have a full length dropping next month.
Posted by xbenx at 12:18 PM

uh, this isn't the whole release

It's retarded that this is so out of print. I've been trying to get this on CD for years because I was stupid and slacked on ever buying it way back when. Never have found it for a reasonable price, either.