It's been one of those days...

Well, its a late one tonight, today has been one of those tumultuous days that we all wish that could be avoided and dread to encounter but its over now and a long, peaceful sleep awaits...

Therefore tonight's post is going to be short and sweet, so here goes. 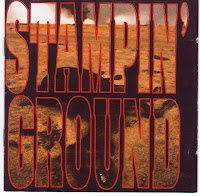 Picking up where I was yesterday but taking a step back in terms of time with Stampin' Ground's first CD release from way back in 1996. This was where the band sounded much more core then metal and they had a different vocalist he added to this sound. I've heard statements made that Stampin' Ground in this phase were a 'heavier,' Earth Crisis, I think that mainly comes from the very chunky guitar tone which sounds like Destroy The Machines amped up on PCP. This was the start of the band's ascent to one of the leading lights of the UKHC food chain, they would go on to release 4 full lengths, 3 of which were on Century Media. One of my best memories of this band was seeing them in 2000 at the Garage (a tiny venue in London), it was with some very dry bands (including Lostprophets I think...I could be wrong, but I swear they were there), anyway, Pierre from Knuckledust annihilated everyone in the crowd with continuous vicious spin kicking and crowd charges and from what one hears here together with the later material its not hard to see why,

Sweet shit. I hadn't heard this record ever so it's really cool to see how theyre evolved from early phase (i got Carved From Empty Words -witch is a fucking killer too and the last record they did + split /w Knuckledust).

SWEET. I gotta buy one of these. I actually never heard this album, but this kicks ass. Totally chug, I love it.

This guitar tone is badass, though!