Straight From The Streets 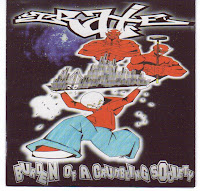 Easily one of the hardest bands I have ever seen live. The first time in 2002 at London's underworld was a war zone, it was absolute carnage and I duly feared that some, if not all of my teeth were about to be smashed. The same feeling was repeated when Irate literally tore through Pressure Fest in 2005, for the closing 'Vendetta,' the whole floor went bananas inciting the kind of dance floor moves best reserved for a Jackie Chan film set. I was privileged to see one of the final Irate shows last year and am still in fact mourning their passing and eagerly awaiting the promised resurrection of the band in a new guise.

Until that moment, let's take a step and consider how monunmetal, Irate were. This their debut from 1998 balanced the sound they would go onto develop on their seminal full lengths "11.34," and "NY Metal." For the uninitiated Irate were from the Bronx and produced an unduly hybrid of tougher then tough New York Hardcore with intricate metal leads, riffs and harmonies. Their sound was thick, relentless but also varied and constantly moving showing that this was no lunk headed troupe intent on busting your head with continuous mosh and beatdown, no, no, no, Irate looked to dissect you from various angles bringing in those breaks when you least expected it.

As you can see, there is only one download link, well I decided to rip the whole CD, zip it and post it as one, hopefully this will work, but if it doesn't, then let me know and I'll rearrange the tunes.

Now I love the sound of "Burden," especially the versions of "Transcendence," and "Gone," which appeared re-recorded on "11.34," here they sound so dirty, so of the streets and makes me want to break everything in orbit when those tracks hit.

Its amazing that no one picked up Irate during their tenure, considering that they wrote better songs and put on one of the best shows I have ever seen. Well, I hope that if they do return, fortunes are kinder to them.

Now due to "Burden," being released on a very obscure label 'Even If It Smells,' and their later output being self released, tracking down their records aint gonna be easy, the band were selling all 3 records on their website but that, together with their myspace have disappeared. So watch http://www.ebay.com/, and I'm sure that when the band do eventually resurface, they will do represses, for now, enjoy 'Burden.'
Posted by xbenx at 1:03 PM

Fucking A. I first heard "Irate's Bronx Unity" and i learned to love that song and later everything else that Irate ever did. All three records are insanely good and i bet they were even better playing live. The Records are pretty hard to find, Goodlife had Burden and all the other records last year, and i managed to cop them from their store luckily. They still have NY Metal tho. Keep up the good work mate!

A great band. Here's one of my all time fave live clips. This shit is intense.

Nice. I only have "1134" and had never heard this one. I used to have "NY Metal" as mp3's but have been lazy about trying to find a copy to buy. Irate was one of those bands whose name I saw all over the place in zines and shit with regard to random little shit, but they never seemed to have much solid exposure. A damn shame.

Some total death metal riffs on this one from time to time, too...

Bronx unity! Also one of the few songs I had back in the day, I think through the then pioneering webzine 'xmulletx'. Anyway, great post again and thanks for the cd, too bad some of the best bands don't get exposure, maybe too hardcore for the hardcore? This shit's so good.

Thanks for the comments guys. And yeah, heeds xMarkus'sx advice and get over to goodlife to get NY METAL!!!

Actually xMarkusx, that Finnish band you recommended, do they have a myspace or anything, i looked for them and couldnt find them :(

Mike, that clip is awesome, and there is actually some footage from the pressure show I was at, but I swear, there was waaaaaaay more people dancing then you can see on the footage.

Andrew, safe for the comment dude, what zines did they use to be dropped in??

Tim, I agree whole heartedly, how the hell this band never get signed is beyond me, they are more deserving then most out there.

Pressurefest clip for Vendetta is seriously insane i have to say, seen it few times. Ben witch Finnish band? Hit me up in myspace or something, i'll add you?