Spin Kicks At Will 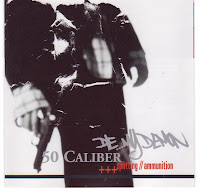 Filled with hate has ascended into one of Europe's premier labels taking all aspects of what makes a good cd...well,...good and assuring that a high standard of quality is maintained throughout their catalogue. Even when the label was just starting out they were making waves with their records and this, only their fifth release from 2003 stands as one of their all time greats. Split cds have always enamored me, I mean you get two bands for the price of the full length and the consistency of the material is sustained throughout each band's half. Through the years there have been some novel ideas with the split, such as each band covering one of each other's songs (the first Caliban/Heaven Shall Burn), to both artists collaborating for one final track (Knuckledust/Stampin' Ground and I've heard that the alleged forthcoming Arkangel/Kickback will feature a track of this nature). But nothing beats two great bands churning out fifteen to twenty minutes worth of juicy material and this is exactly what is to be found here on 'Splitting Ammunition.'

I remember Die My Demon coming out as they were formed from the ashes of Sad Origin. Whereas the latter were more metalcore, Die My Demon were distinctly influenced by New York and especially Madball but added a distinct European flavour that made these tunes sumptuous in their delivery. 50 Caliber have become one of the UK's most well known bands on the mainland and have been churning out their vicious, downtuned, beatdown heavy metallic hardcore for a long time now. The songs here are so much stronger then their debut EP 'Internal Bleeding,' and hinted at the various directions the band could have pursued on their promised full length due to follow this release. Well the band has been plagued by line up changes and issues since the release of this record and continue to suffer to this day, let's hope they can get the full length out this year but in the meantime, see what you think,


Even though this only came out a few years ago, its now out of print on the label, I have found copies here - http://www.pyrrhus.be/scripts/prodView.asp?idproduct=192465 but as I have said in the past about this store, they can be very slow, so I've found a copy here too http://cgi.ebay.de/Die-My-Demon-50-Caliber-Split_W0QQitemZ150092479067QQihZ005QQcategoryZ87349QQrdZ1QQssPageNameZWD1VQQcmdZViewItem
Posted by xbenx at 7:17 PM

Bought this at Deadfest 2004 after 50Caliber's show. Billy almost gave me like 200 swedish crowns as change cuz he didn't have clue are 20kr coins like 20 cent coins or something. I had to correct him so i got the right change eventually. I don't care that much of DMD's side but 50 caliber is great. Got clue if their mcd's are still available?