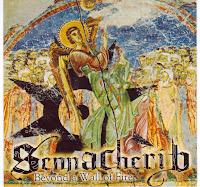 Day Of Suffering have ascended through the years to become one of my all time favorites. Their sound and their attitude fortunately spread through to some loyal disciples (Heaven Shall Burn most notably until they signed to Century Media and stopped sounding like an even more metal incarnation of DOS) but now, the band face being cast into the annals of history with countless others as one of "those," vegan bands from the 90s that sound dated and "weak," because they are bereft of certain elements circulating in today's music that makes it heavy.

What's most frustrating is that 'The Eternal Jihad,' (DOS's lone full length) hinted at so many possibilities some of which I understand were explored on a demo that the band released in 1998. I haven't personally heard it but I have been told that it sounded like the band's older material mixed with vicious black metal, apparently that track (and some others) will be surfacing at some point this year through www.xcatalystx.com. Anyway, after Day Of Suffering's demise two of the members (Rob Townsend and Paul Hart) went on to form this short lived project and it looks like they released nothing more then these two tracks (taken from a demo that was limited to 25 copies, how kvlt is that??).

Despite the brevity, for 11 minutes it sounds like the world is going to cave in, imagine Townsend's and Hart's former material mixed up with a heavy dose of Morbid Angel, broody vocals supplied by Ted Gasper and voila! Armageddon unleashed.

Due to this being released on a good label that keeps their stuff in print you can find this easily and is readily available here for a good price - http://www.verydistro.com/moreinfo.aspx?id=3624.

Again, its utterly infuriating that this band only put out these tracks, with a little investment they could have been something that equalled or even surpassed the almighty Day Of Suffering.

I guess we will never know.

Has Catalyst released the long promised re-issue of "Eternal Jihad" yet?

I'd love to hear their unreleased song "Revolution towards salvation" once again. It's supposed to be on the re-issued cd.

As of yet Mike no, they are still working on it together with a CD of unreleased material, the latter will include stuff like the falling down 7 inch, that track you have mentioned and some others, cant wait!!

A friend of mine mentioned 2012 last night to me and it's the first I heard about it so I jumped on here out of curiosity. I think it's kind of sick and sounds like a bunch of skeptical jargon.
I choose to live every day like it is the last because let's be real, WHO THE HELL KNOWS what is going to happen or when it's your time to go on. The past is history, the future is a mystery and now is a gift, thats why it's called the present. It's not healthy to sit around and trip out about when you will die. Stop wasting your time you have now.
[url=http://2012earth.net
]your new chakra system
[/url] - some truth about 2012