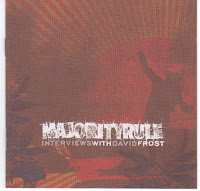 I really don't know how I came to be acquainted with this band, I have a filling it was through their affinity with the almighty Page 99...probably, anyway, I'll quit the foreplay and get to the bones of the matter. Back before 'emo,' became a dirty word amongst snobby music circles, it was a term that (like hardcore) covered and encompassed so many bands with contrasting styles and approaches. Certainly classic 'emo,' would be associated with the calmer splinter of bands that sounded like indie rock but with broken hearts. But there were also those that were bracketed with the term that were far far removed from those calmer folks.

Amongst the finest were Majority Rule, whom I remembered being described to me as "emo-violence," back in 2001 when this record was unleashed. Now although the band described themselves as punk (like their kindred spirits Page 99) they sound nothing like what would be deemed as the archetypal punk band (so Rancid fans, leave now). Rather, this was a far more visceral brew complete with scathing vocals and stabbing guitars that swung and collapsed without warning, without structure, yet, despite the instability and the manic nature of their songs, Majority Rule were so adept at making their pieces memorable, filling them with beautiful (yet destructive) riffs and lyrics.

The band called it quits in 2004 but in their 8 years they were far from lazy, putting out two cds, a split with Page 99 and a slew of 7 inches.

If you feel the tunes support the band, they are still selling copies of this one together with their other cd releases here - http://www.majrule.com/main.htm.
Posted by xbenx at 11:54 AM

i love this band. such a great album. if you can try yo get this on vinyl it sounds amazing.

I remember seeing them (4 or 5 years ago) in my friends' living room with Dear Diary I Seem to Be Dead & Takaru, then the next night at 924 Gilman. Later that week, Circle Takes the Square played the same living room. Great times.

Good stuff. Reminds me of Love Lost but Not Forgotten. Great band there too.

Safe for the comments guys. xYosefx, that must have been a mad show, what the hell's going on with Circle takes the square.

Chris - thanks for the tip, since the turn of the year I've been collecting way more vinyl so if I find this I will buy it ;)