So no post yesterday, this was due to 3 reasons, firstly because I did an extra post on Saturday, secondly it was a bank holiday and finally I spent the whole day at the Rucktion Damage Control fest, featuring la crema della crema of the UK's hardcore talent. It was easily the best show I've been to this year and by that I mean the whole thing was quality, granted I've seen better bands this year but not a single show that I've been too in 2007 since coming back from Rome matched yesterday's.

The show reminded me of how lucky I am to have this scene so readily available and one that is growing rapidly and expanding to frontiers that I would have never imagined so I thought it was about time that UKHC got some attention on here. 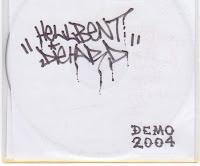 One of the early bands on was Hellbent Diehard. Formed in 2004 they comprise of 3 old skool UK heads that have been part of the scene for a long, long time. I remember them playing their first show while I was away in Italy and being majorly gutted to hear reports that when I got back that the show was not only amazing but that Hellbent were one of the day's highlights. Never mind. I've been lucky enough to see them many times since that day and each time it has been more and more impressive. This demo is impressively recorded (thanks to Sam the man's home studio, he is also the drummer) and brings out the fullness of the beats and riffs. Clearly their material is heavily influenced by their surrounding UK scene but the band also bring in influences from Cleveland and New York bands to create and even dirtier, grittier sound.

The band have been long working on their impending full length, which they told me yesterday is coming, they just need to record and trust, when it does drop its gonna be some heavy shit because they have progressed immensely from this demo, so keep watching here - www.myspace.com/hellbentdiehard 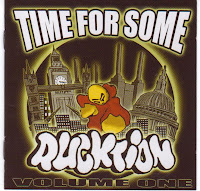 by the almighty Rucktion records. This took a long time to come together but was worth the wait as most of the tracks featured here are exclusives to the comp. Hellbent Diehard also feature here and sound like a completely different band as the heaviness and intensity are amplified tenfold to bring forth a devastating track that beckons well for that aforementioned full length. There are some of my favorite UK bands on this, including, Blades Of Unity (Maniacs from Liverpool) Ninebar (London's answer to Bulldoze), Diction (Croydon's finest) and TRC (not 1, not 2 but 4 vocalists). The UK bands are becoming so much more popular now, thanks mainly to the efforts of Knuckledust through the years they have opened doors for bands like TRC and Diction to play the mainland and finally get the recognition and respect they deserve.

I haven't uploaded all the tunes because its still readily available from www.rucktionmusic.com, so if you feel what you hear, then buy it.
Posted by xbenx at 6:02 AM

Hellbent Diehard's not bad. I've heard better from the UK (whose scene is actually pretty damn underrated worldwide in my opinion), but this is solid. Haven't had time to download the comp yet, but I will. Rucktion definitely has some killer shit.

I need to grab that Six Ft. Ditch disc that Filled With Hate put out, too. That track on the FWH MySpace page makes me wanna fucking kill people.

I like to say that Hellbent Diehard impressed me a big time. Ok it's just a 4-song-demo but you can tell the potential.

In this kind of hardcore like the most i dig Hatebreed, which their "Satisfaction Is the Death of Desire" is an unbeatable and an unquestioned king. What i don't like about their last LP "Supremacy", which lacks this kind of spontanious fury. It's too designed, programmed. Sounds great but that's all i think. Maybe because Hellbent Diehard is a relatively new band they are less predictable. Good for them!

Yo ben!! It's Sam HBDH here!! The album has finally dropped bro!! here's some info.

Hellbent Diehard's 12-track debut full-length, 8 brand new songs and 4 trax previously heard on their limited edition demo. Trust, you are not ready for this band! From Croydon, South London, with members of Diction, 9bar, Frightener, Downtrodden and Last Hours Of Torment.

"Featuring guest appearances from Nicktion (Diction), Pierre (Knuckledust, Bun Dem Out) and DBS (Injury Time, Kartel), this album truly pushes the boundaries of what can be considered heavy hardcore!"