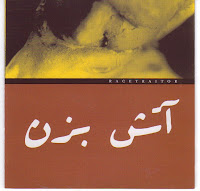 Its stupid you know, I've developed a really, really silly habit of buying things on a whim and not investigating properly before. Good thing I'm not overly fussy, otherwise I would have sold off most of my collection by now. Anyway, I digress...right, this habit has been cultivated either by a vague memory of reading something, somewhere about a band or hearing someone, somewhere saying something about a band. Mostly (in fact, luckily for me, mostly) this hasn't resulted in a detrimental outcome and I've liked what I've bought on that whim, other times I haven't been so lucky, and sometimes, sometimes, it has reaped a real surprise, like this evil mofo here.

The record was released in 1998 on Uprising, a label that has confused me profusely ever since I got into hardcore. They have released some quality records, but a lot of their stuff leaves me indifferent, especially these days. In fact, even in the label's super vegan militant guise, there was still the tendency to drop the odd clanger here and there. Not so with this baby though. Taking a smouldering Deadguy framework (I definitely hear a dissonant influence from that band) and melding with absolutely crushing riffs that verged on death metal Esq ferocity, Racetraitor showed that they were not to be taken lightly. Typified further by the lengthy essay in the booklet which highlights various ills of man.
http://www.sendspace.com/file/zab9f0 - Racetraitor - 'Path To Misery'
http://www.sendspace.com/file/b4zda0 - Racetraitor - 'Burn The Idol Of The White Messiah'

Hilariously, members of Fall Out Boy did time in this band, and most of them members at one time or another went on to endeavors that were of that ilk.

Well, Uprising Communications is run by Sean Mutaqqi of Vegan Reich / Pressure / Captive Nation Rising fame, all of whom i love. Wikipedia sez :

"Sean Muttaqi was in the early 1980's punk band Legal Suicide, and went on to form the infamous hardcore punk band Vegan Reich in 1987. With the demise of Vegan Reich in the early 90's, Muttaqi did a stint in the Reggae band Captive Nation Rising and later played in the band Pressure (along with Chuck Treece and Ray Rodriguez). He also pioneered the hardline and Vegan Straight Edge movements. He founded Uprising Records of Los Angeles, California in 1994. Having explored Rastafarianism, Buddhism, and Taoism in his younger years, Muttaqi finally embracing a Shi'ite-influenced form of Sufism , or Islamic mysticism, some time in the 1990s. During this time, he wrote some vegetarian and environmental pamphlets from a Muslim perspective, under the pen name of Shahid 'Ali Muttaqi, and was heavily involved with the Ahl-i Allah and Taliyah al-Mahdi movements. His most current endeavors in music are in production, having worked on the American Black Lung and Amir Sulaiman albums."

Chuck Treece played in Mc Rad and Bad Brains at some time and Ray plays to this day for Vietnom.

Sean is connected to NYC hardcore attorney Dave Stein and of course the infamous Syracuse vsxe movement, hence the involvement of Pete Wentz from Fall out Boy.

This connection also explains why his label has released records by
all these different bands.

sooooo.... I ve been a Conflict fan since the mid 80s ; no wonder i absolutely LOVE the VEGAN REICH lyrics to this song... both lyrically and musically, this reeks of CONFLICT !

Check it out for yourselves, some 17 years later :

Fuck you, shut your fucking mouth. We didn't ask for your opinion. We're telling you the way it is so sit back and listen. Your position is irrelevant to this situation, it's black and white, you're wrong we're right, and you'd better come to that realization. Because it's murder plain and simple, no justification for the taking of a life without provocation. You'd be guilty of crimes in courts through out the nation; if your victim was human you could face execution. Laid down in stone there can be no other definition. Meat and dairy production is torturing, is killing, for no purpose for your ego for the taste their blood you're spilling. Belsen, Auchwitz, Dachau the similarity is frightening. A master race mentality of liberty for those with superiority. Your moral civilized society is built on brutality and cruelty. Where normality is insanity and sanity extreme ideology. Like the resistance to Nazi Germany, we don't obey laws of barbarity. So expect no fucking mercy if you're guilty you will pay. No chances to discuss it you're gonna fucking hang. Terrorists and hooligans? Just you fucking wait! If that's the image you create of us you ain't seen nothing yet. What did you think this was a college debate? This is war so stay the fuck out of the way we're coming through that door. And once we free those enslaved we'll even up the score. Guilty of murder you'll face the new law!

When ever I surf on web I never forget to visit this website[url=http://www.weightrapidloss.com/lose-10-pounds-in-2-weeks-quick-weight-loss-tips].[/url]Lots of good information here noneedtobelong.blogspot.com. Do you pay attention towards your health?. Here is a fact for you. Research shows that about 80% of all United States adults are either fat or weighty[url=http://www.weightrapidloss.com/lose-10-pounds-in-2-weeks-quick-weight-loss-tips].[/url] Hence if you're one of these people, you're not alone. Infact many among us need to lose 10 to 20 lbs once in a while to get sexy and perfect six pack abs. Now the question is how you are planning to have quick weight loss? [url=http://www.weightrapidloss.com/lose-10-pounds-in-2-weeks-quick-weight-loss-tips]Quick weight loss[/url] is really not as tough as you think. If you improve some of your daily diet habbits then, its like piece of cake to quickly lose weight.

I have been visiting various blogs for my term papers writing research. I have found your blog to be quite useful. Keep updating your blog with valuable information... Regards