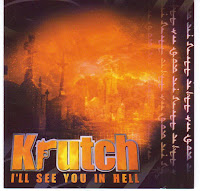 Like so, so many, Krutch slogged their guts out and reaped immense respect from those in the know, but they never received the widespread recognition that they deserved. Sure they were known back then, but how many bands openly acknowledge Krutch as influence in comparison to say Fury Of Five or Bulldoze or Second To None? Not many and that is indicative of how few people knew about Krutch, and what’s really sad is, like Spirit Of Youth in yesterday’s post, time hasn’t been kind and not many people are going to actively seek out the band’s back catalogue.
Well, I am going to try and change that here.

‘I’ll See You In Hell,’ was a daring record. 18 tracks would lead one to think that there is a lot of filler on board, but this isn’t the case, the record is beautifully paced and each song has its own distinctive feel. What’s amazing though is the amount of tracks the bands penned that have a grungy but acoustic Alice In Chains feel, and are very, very mournful, certainly makes a contrast with bruising numbers like ‘BFL.’

See what you think,

The band’s follow up ‘Whatever It Takes,’ was also excellent and the band continued to tour until disbanding in 2003. Members can now be found in Boxcutter, Wisdom In Chains and some other BFL bands.

I'm totally into Krutch's "Our Thing: The Mafia Years" and their mcd "Brotherhood/Sisterhood". I gave this a shot too few years back, but weren't into that whole AIC-grungy stuff, didn't land. Other hand the hardcore tracks on I'll See You In Hell are really good. I'd definitely buy this one if i'd see it in a distro or so on. Anyhow, you're on the point here, Krutch is really underappreciated band!