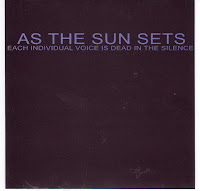 This shit is crazy. Fuckin crazy. Way nuttier then their following releases and way better then anything by the band's successor, Daughters (although to be fair, only when member of As The Sun Sets went into Daughters, and he didn't even play on this album). Damn, I remember this being one of my obsessive, elusive albums back in the early years of this decade, together with Coalesce's 'Give Them Rope,' and some other chaoscore records that I couldn't find at the time (names which escape me). So how delighted I was to find that this record came back into print, be it limited, and was available through my favorite online store, www.verydistro.com!! I ordered that shit quicker then it takes me to finish a bowl of pasta (and I eat quick), and awaited eagerly till the day that it dropped through the letter box.

What confronted me was barely twenty plus minutes of unhinged, unrelenting fury that was so utterly caustic and morbid that it left me dazed after each sitting. Even now as I play it through earphones, 4 years since getting it, the same affect is encountered. Now if I am not mistaken this record dropped around 1999, the same year as another musical apex, namely 'Calculating Infinity.' Now whilst the latter has become one of the defining records of my musical generation it should not be used as a point of reference for this band. No doubt As The Sun Sets knew of Dillinger and despite there being parallels between the band's musically, As The Sun Sets do not rip Dillinger off, which is the ignorant, lunk head commentary that I have heard in regards to this band.

Check it,
http://www.sendspace.com/file/z7tsbn - As The Sun Sets - 'Carpathian'

- As The Sun Sets - 'Each Individual Voice Is Dead In The Silence.'
This record floats in and out of print, so grab it here while you still can - http://www.verydistro.com/search.aspx?typeofsearch=artist&keywords=as+the+sun+sets
Posted by xbenx at 5:20 AM

Both of the links are down. Please reupload