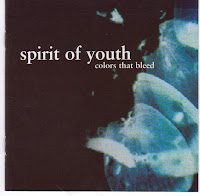 You know, I used to mix up this band with another one called Sportswear, god knows why and god knows how because both sound completely different in spite of them sharing the same label. Anyway, Spirit Of Youth are a band that time has not been kind to, they never ascended to the heights of fame (well, as famous as you can get in the hardcore sphere) and recognition that the likes of Congress, Liar, Arkangel (and a whole laundry list of other Belgian luminaries) have been bestowed with and are certainly not as enamoured as those bands. Granted, they weren't as innovative as any of those bands (as well as others from Europe and Belgium) but they were writing excellent, but above all sincere, heartfelt music that in my mind deserved my recognition then thy received.

I've had a really hard time nailing exactly how this band sound as they were not atypical of the H-8000 madness that was rife in the mid 90s. That's not to say that they didn't sound that way as they do have elements of that style (particularly those accented vocals which bring to my mind their brethren Kindred) but its a less extreme variation of it. The likes of Liar and Congress were maxed out metal and holy terror hardcore (particularly the latter), Spirit Of Youth had their influences too but mingled them closer within one another so that their sound was purely holistic, thus making their influences that much harder to trace, hence my difficulty.

Anyway, see what you think,

What happened to this band and its members is unbeknown to me, anyone with info, fill me in :)

So if you like it, grab it - http://www.verydistro.com/moreinfo.aspx?id=1028 or http://www.goodliferecordings.com/webstore/

Whoa, I had never heard this band before, but this is pretty damn good. Nice and energetic compared to a lot of somewhat similar bands from that day and age...

Spirit of Youth is/was the brainchild of brothers Dominic and Frederic who hail from Roeselare, heartland of the H8000 area in Belgium - this is the coastal area, bordering on the Channel.

Dominic is the oldest of the brothers and met Hans from Rise Above / Blindfold /Liar /Your God is Dead while skateboarding the city and this how he got into sXe and hardcore.

In all of the bands he has started, Dominic played lead guitar and his brother played the drums, still to this day, some 17 years later.

When Spirit of Youth started, they were an old school sXe band, think Youth of Today, and released one 7" on German Crucial Response records.
Vocalist on this platter is Jean (now of Harai Tattoo fame and also
bassplayer in Blindfold).

After Jean left the band, Dominic asked yours truly to sing for them and with this line-up we recorded a largely unreleased demo - and the music had dramatically shifted style after I'd introduced Dominic to bands like Dag Nasty, Second Wind and later era Minor Threat. About 100 tapes were sold, and one track appeared on Warehouse Records' (pre-Goodlife) V/A Regress No Way compilation 7" which also featured Nations On Fire, Blindfold and Shortsight. At this point,
Frederic was only still about 13 years old, he was a phenomenon !

A couple more songs from the demo appeared slightly altered on a 7" on Machination Records, under the moniker 'Love, Truth & Honesty'.

Shortly after that, the brothers befriended a HUGE young biker/hell's angel type from Roeselare, Sid. With him they started a new, much heavier
band called SOLID, who released a few records on Belgian RPP Records from Brussels.

Dominic is a guy with musical tastes that could easily change - sometimes hearing ONE record that impressed him would completely change his vision instantly and he would change/adapt his current project's style drastically. Hence the brothers came back with a new Spirit of Youth line-up and style, releasing a full length on Hans'
Sober Mind Records, called 'Source', said full length on Goodlife and a split LP/CD with New York State's One King Down, also on Goodlife. SOY tried touring once,
went on a european tour with 25 Ta Life in the 90's, only to get kicked off the bus after a couple days after repeated and straight edge - related arguments.

Needless to say, the band never got anywhere apart from locally. Solid reunited a couple times and did a couple recordings and currently the brothers are
at it again in a band called BLOOD REDEMPTION that have released one mcd with a full length on the way.

All of the above records are very decent and well worth tracking down but long out of print and sought after - feel free to drop me a line if you are looking for anything and i'll try to hook you up.

Ed, you should be a hardcore historian, that's exactly what I was looking to read ;) Heh. You know what, I like the Solid full length but that EP that came out on RPP was dismal. Shame.

According to Revhq one of the members is now in Rise and Fall.

I just picked up the love,truth, honesty 7inch at amoeba records for like 2 bucks. I'm very happy with it being just a random buy while i was waiting for a show to start in hollywood.

that is awesome that you found a copy of the Love, Truth and Honesty 7" !

did you check out the Bananarama sample at the end of side B ? Make sure to crank up the volume all the way.

the cover layout is based on the typical layout of classical / renaissance label L'oiseau Lyre out of London UK, to whoms releases i was heavily into at the time.

the style shows a heavy Minor Threat / Dag Nasty influence, do you agree ?