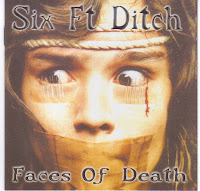 Here's the scene. Ninja Fest (now the UK's most revered hardcore fest), 2004, some tough bands were playing that year and none tougher then the UK's own Six Ft Ditch. Shit, there have been few times when I have been worried in a pit, but this was one. Coming out in blood splattered gear, bandannas and sporting plastic weapons (ok, that slightly demeans the scene I'm trying to set) they pulverized the venue and incited the crowd to do so tenfold, I mean, it was chaos, bodies were flying everywhere and how someone didn't end up going to hospital that night, I'll never know.

Since then the band have continued to grow in stature, rising to become one of the UK's best known bands (alongside Knuckledust) typified by them being picked up by Filled With Hate to release their last record and playing this year's Pressure Fest (which is going to be mayhem).
Of their 3 releases, this one has stood as my favourite, it was their debut on Rucktion released back in 2003. There was a lot of hype and expectation for this one and it did not disappoint. Despite the brevity, Six Ft Ditch pack in some serious meaty riffs, plenty of breakdowns, beatdowns and mosh that is so infectious that even when I'm in a public place I want to fly into the person nearest to me.
See if it does the same to you,
http://www.sendspace.com/file/2ifx35 - Intro - Six Ft Ditch
http://www.sendspace.com/file/pqyg7m - Face Of Death - Six Ft Ditch
This is still available from the label, so if you feel it, pick it up, http://www.rucktionmusic.com/default.aspx?productID=80

Oh yeah, here's again a definite reason why i love UKHC. Six Ft Ditch is definitely one of my favorite bands, hope they don't cancel their appearance at Deadfest this year so i get finally to see em live.

Nice. I still gotta buy some shit from this band someday, ha...

This is a definition of thug rough hard core music in a pill. No prisoners. No looking back. No mercy. Strictly in tha face!!!